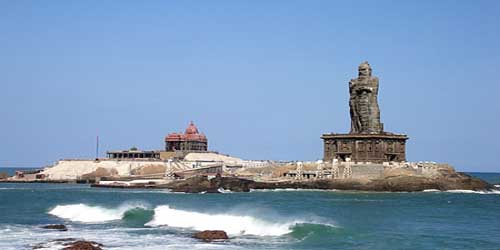 Kanyakumari is a town in Kanyakumari district in the state of Tamil Nadu, India. It is a common knowledge, that it is the southern most tip of India which is also the reason why it is frequented by so many people. It was earlier known as Cape Comorin. It has a vast and interesting history of the various rulers who ruled in the different areas of Kanyakumari, then known as Cape Comorin. Due to many religions co-existing in the region, Kanyakumari is rich in its literature as well as diverse architecture. One noteworthy and interesting fact about the modern history of Kanyakumari is that it was merged into Tamil Nadu state, which was then known as the Madras state, in 1956.

Being the southern most tip if the India, one can get a panoramic view of the vast water body comprising of the Arabian sea, the Indian ocean and the Bay of Bengal. It is interestingly believed that one can actually point out the difference in the shades of water from the three water bodies. Besides, one can get the perfect view of the sunrise and the sunset as there are no obstructions while viewing it.

As the mythology goes, Kanyakumari gets its name from the virgin goddess “Kanya Devi” whose temple is built here. It also known as the Kanyakumari temple situated on the shore. It is one of the Shakti Peetha is dedicated to Goddess Parvati. It is said that the diamond nose ring of the deity can be spotted from the sea itself.

It is an amusement park and chilling spot during the sizzling summer days. This entertainment spot is highly appreciated by visitors coming during summer days.

It was built in 1970 by Eknath Ranade and is one of the biggest statues in Asia. It is one big rocky islet situated at the south east of Kumari Amman temple. One of the rocks called as the Sri Padhaparai is believed to have the footprints of the holy goddess. Also, Swami Vivekanand is believed to have meditated on this rock which also has a dhyana madapam created for people who would want to meditate.

A very notable feature of the memorial is that it was built inn such a way that on the 2nd of October, the birth anniversary of the Mahatma Gandhi, the sunrays would first fall on his ashes which were kept here for the visitors.

As Kanyakumari offers an unobstructed view of the sunrise and the sunset, people flock to see the same, especially on the full moon evenings. It is that time when one can get a glimpse of the sunset and the moonrise simultaneously. Over the time, this has become the most important point the tourists’ ‘To-Do’ list when they visit Kanyakumari.

One take a train or a bus which connects Kanyakumari with Nagercovil and Kuzhithurai.