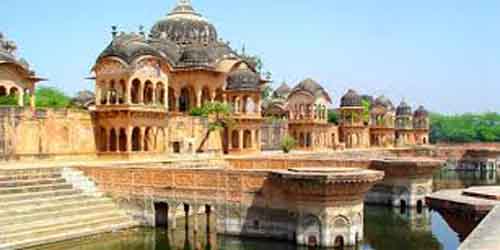 Vrindhavan is a town in Uttar Pradesh, India, belonging to the Mathura district. India is closely knit with stories of Krishna and almost every kid will have a childhood favorite character, Krishna. According to the Mahabharata, it is an ancient forest, a region where the Supreme Lord Krishna is believed to have spent his childhood days. This town is around 10 km far from Mathura, which is the birth city of Lord Krishna and is near the Agra-Delhi highway. The town is filled with hundreds of temples that are dedicated to the Radha and Krishna. It is considered very auspicious by many religious traditions such as Vaishnavism, Gaudiya Vaishnavism, and Hinduism in general.

Vrindhavan is like any other place in the northern part of India. The summers and winters are extreme and difficult to bear. So, the best time to travel is between November and March, when the climate is moderate and bearable. It is very enjoyable during February-March, as the town becomes even more colorful during holi.

Vrindhavan is a place that is filled with temples dedicated to Lord Krishna. You can spend how much ever time you want to spend in the city visiting every beautiful temple there. There are lots of companies offering package tours to this place and each of them compete to provide better services for affordable prices. Make some analysis and pick the best one. Few famous destinations to visit are.

The Prem Mandir is a temple dedicated to Lord Krishna. This temple is built with stunning architecture from the entrance, inside and every single part of it. The temple gives a very divine feeling and makes the tourists to be awestruck with this wonderful art and architecture.

The Govind Dev Temple in Vrindhavan is built in the 16th century by Raja Man Singh. It is a wonderful example of medieval Indian architecture. The temple building is closely associated with the Vaishnavite, a famous preacher and poet, Rupa Goswami. It is a beautiful temple with seven storeys, dedicated to Lord Krishna. The temple looks like a European cathedral because of the way the pillars and colonnades look.

The Krishna Balaram Temple was established under the aegis of ISKCON. Iskon is an international Krishna Consciousness religious group. This temple is one of the most beautiful temples in the city and is a part of the major spiritual and religious center, belonging to the worldwide Hare Krishna movement. The temple is full of life throughout the year with its festivities on every aspect and step of Lord Krishna’s life.

The Bankey Bihari Temple is one of the most auspicious temples in the town. It was established in the times of Mughal emperors by Swami Haridas, who was the guru of Tansen. He was the famous court singer of the Mughal emperor, Akbar. The temple is called so because of the bent posture of the Krishna idol within the main chamber. This idol has a great history associated with it. This idol was apparently made according to Lord Krishna’s image that Swami Haridas saw in his dream.

It is the main market of Vrindhavan, near Vishram Ghat. You can buy things like ethnic dresses, craft items, paintings and other art items, idols and silver jewelry. As usual like any other market place you must bargain to get the items on best price.

You can visit Vrindhavan through any mode of transport like Air, Train and by Road. You must decide the mode based on the city from where you want to visit the place. There are lots of nice hotels near Iskon temple like Hare Krishna Orchid, Hotel Ananda Krishna Van, Hotel Kridha Residency, and Hotel Krishna International. All these hotels provide all the facilities and amenities and give a pleasant stay to anyone visiting Vrindhavan.